What the eyes can tell you

Although much of NLP originally came from an innovative splicing together of existing ideas, one of the many truly new insights that Bandler and Grinder developed came through watching how our eyes move when we think. Through meticulous observation, they noticed that when we think in a specific representational system, our eyes move to reflect this. This discovery was truly revolutionary.

Ut imago est animi voltus sic indices oculi. (The face is a picture of the mind as the eyes are its interpreter.)

How would you like be able to tell how someone is thinking?

Not what they are thinking, but how. If you know how someone is thinking, it will be much easier to establish rapport, and rapport is the foundation for effective communication.

When we use a particular representation system to access memories, our eyes move in a specific direction. For example, when your mind is processing images, your eyes will tend to look up. NLP calls this phenomenon ‘eye accessing cues’. The amount and rapidity of eye movement will vary from person to person, but the movements are usually easy to see once you know they are there. 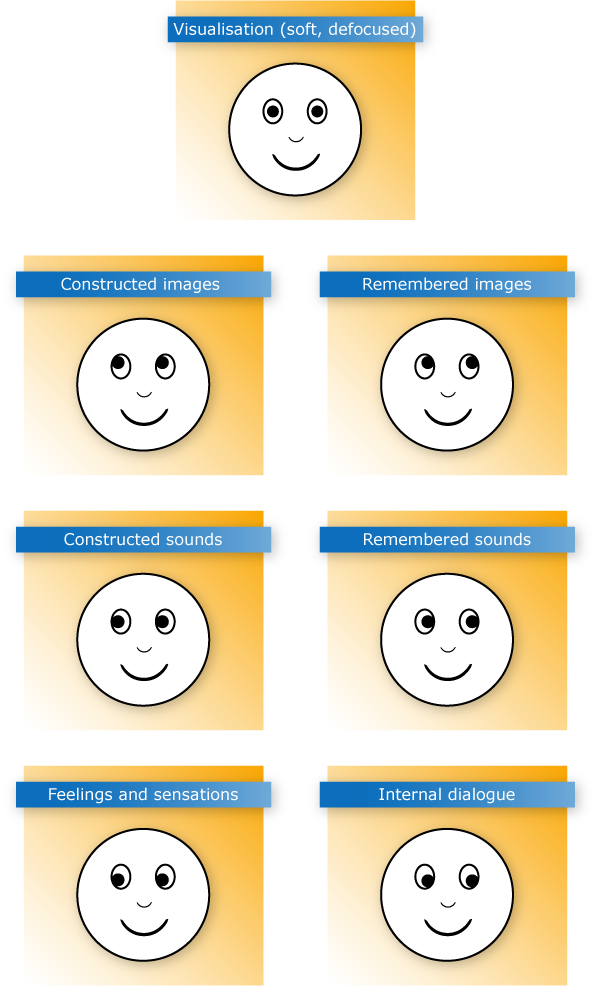 These diagrams show what you would see if you were looking at another person.

The first step you need to take is to satisfy yourself that this really happens, and the only way to do that is to watch people with a sense of curiosity. Here is a simple exercise you can do with a friend. By the way, you can never observe eye patterns in a mirror, although many people have tried!

This exercise involves using a simple question or statement – one that uses predominately one representational system – to trigger a thought in your friend’s mind. As this thought arises, observe the immediate response of their eyes. Your friend does not have to do or say anything at all and it is best if they are not looking directly at you.

Here are some sample questions and statements to elicit eye patterns. Print them out and then mark a little arrow next to each one, indicating the direction in which their eyes moved. Then go back and compare your results with the chart of faces above.

You may find that it helps if you read through the list of apparent anomalies, below, before doing this exercise.

As you work through the list, read each question to yourself first; look at your friend’s eyes, and then ask the question out loud. If you just read the questions aloud, then look, you will probably miss the eye movement, which is sometimes no more than a flicker.

There are a few apparent anomalies that may crop up as you watch people’s eye movements.

Some people are completely reversed in their eye patterns. That is, their eye movements are like mirror images of the diagrams above. This is most often observed in people who are left handed, and very rarely in right-handed people. Some observers reckon that about half of left-handed people have reversed eye patterns, so this is a small percentage of the population, maybe around five per cent.

This reversal is consistent. For example, you will never find that someone is reversed in their visual quadrants but normal elsewhere.

When accessing memories, we have a ‘hook’ that we use to bring them into awareness. This is called a retrieval cue. There is more on this in the topic on Memory. This cue or hook will be in a specific representational system and for many people this will be consistent, regardless of the content of the memory they are accessing. For example, if they use a visual cue, they will flick to visual before accessing any memory, even if it is not a visual memory.

Note that a person’s lead system may well be different to their preferred or primary representational system.

If you ask someone about a fact or ‘memory’ that they use every day, they may have this so close to the surface of their mind that they don’t need to access it. For example, if you ask someone the colour of their car, they can probably tell you without any accessing cue at all.

The eye-brain link works both ways

One interesting feature of eye patterns is that the direction in which the eyes are looking will influence the representational system used in thinking. For example, it is difficult to remember images while you are looking down. We can use this in a number of ways.

When we hold onto a problem, it is often because we are not thinking about it in a sufficiently flexible way to find the solution. The next time you are stuck like this, influence your mind to think about the problem, but this time use different representational systems to the one you normally use. This will help you to change the way you ‘hold’ the problem so that you have more choices, including the choice to simply let it go. The following exercise will show you how this works.

You will need to do this with a friend.

Without saying anything, think of a smallish problem or something that bothers you. It may be a memory of an argument, or a person that just annoys you, or a project that you seem blocked on, or your reaction to traffic.

Now think about how you would like things to be instead.

While you hold both these ideas in your mind, have your friend move their hand so that as you watch it, with your head still, your eyes randomly go to all six points of the eye patterns. Do this for about a minute so that you change the representational system about once a second.

Now think about the original problem and notice what has changed about it.

Feel free to do this several times with the same problem. It will probably change each time, and may well disappear altogether.