People typically go through several quite well-defined stages during a change process, or indeed when any change happens in their lives.

What they require from you, their manager, will depend on which stage they have reached. So if you know about these stages, you can then lead and manage people through change more effectively. 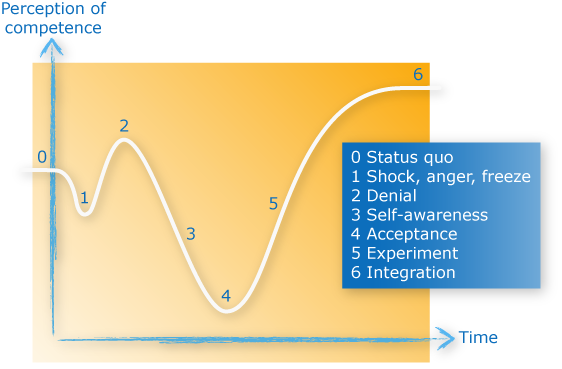 The origins of this curve come from Kübler-Ross’ work on how people react to the shock and change of bereavement. It has since been refined and verified in both business and personal change of all kinds.

It is important to note that the vertical axis is a measure of a person’s perception of their own competence, not their actual competence.

If we want things to stay as they are, things will have to change.

In the ‘good old days’ before the introduction of what has been referred to as the foreign element, people feel a sense of security and stability and have built up systems and ways of working to protect this. They have invested in this stability and it is important to them.

It is at this point that the curve crosses the vertical axis and the foreign element is introduced. This could be an announcement or event from outside, or a realisation that occurs inside an individual. Either way, the status quo is disturbed. The level of disturbance will dictate how deep the next step is.

This emotional response results from the difference between the expectation of life as normal, or life under control, and the reality of the new situation. In extreme cases, for example in the case of a bereavement, this can incapacitate a person. In mild cases, the realisation that change is on the way may cause barely a ripple on the graph. This stage may last from seconds to days. Many people just need space to work their way through this stage. Extreme cases will require professional counselling, though this would be rare for a change relating to work.

The depth of the dip on the curve is directly related to the difference in expectations between how good life would have been without the foreign element, and life with the new foreign element.

It takes a lot of courage to release the familiar and seemingly secure, to embrace the new. But there is no real security in what is no longer meaningful. There is more security in the adventurous and exciting, for in movement there is life, and in change there is power.

Denial is where a person either actively or blindly does not accept that a change has occurred or, more often, does not accept that they themselves need to change as a result of the external changes in their environment. There is a sense of blind faith that their existing toolkit is adequate, even if it is not. They often think their own performance has gone up, though everyone around them sees that it has actually gone down.

This is a comfortable and seductive place to be. This is the place where people can get stuck. When this happens, they don’t follow the rest of the curve and instead ‘flatline’ through a change. These people then become the change dinosaurs and eventually lose their job when it becomes obvious that they will not adapt. In the meantime, they can undermine change by their attitude.

The only way off the denial spot is self awareness.

The way to coach someone through this is to give feedback, so they become aware of how they need to change, and that change is indeed necessary. Remind them in some way that what they seek to maintain or keep the same is really the sense of security and stability they previously had. In order to keep this sense of security the same, they need to adapt to the changing environment.

This is when a person becomes self aware that change is required. They realise that their current toolkit is not up to scratch to deal with the change in their environment and that they are not performing as well as they used to. This feels terrible and uncomfortable. Some move away from this feeling of being inadequate and scuttle back up the curve to denial because that is much more comfortable.

This stage can also be characterised by resistance. ‘I know the change is happening, but I don’t want to participate.’ People can resist in many ways, such as by seeking more information, personal attack, silence or challenging the methods of change.

You need to recognise that you are hearing resistance rather than direct opposition. Hold up the mirror; help people to recognise they are resisting, and encourage them to move on to the next stage. Teach them this change curve, so they have a rationale for why they feel unsettled, and know that it will pass.

This is when a person finally realises that they can make a change. They now understand that it is down to them and they are not simply at the mercy of the environment. They take responsibility for their need to change and this is when they turn the corner.

Your role at this stage is encouragement and support, as this sense of self responsibility can be daunting. They need to know that help is at hand so they can turn their attention to getting on with it.

Everybody has accepted by now that change is unavoidable. But that still implies that change is like death and taxes; it should be postponed as long as possible and no change would be vastly preferable. But in a period of upheaval, such as the one we are living in, change is the norm.

This is about experimentation and learning, and exploring ways of making the change work. People need space to make mistakes as they are learning and integrating new skills. They are expanding their toolkit. Their production may be down while they learn. Their self confidence, however, is increasing.

During this stage you need to encourage, listen and support. People are beginning to find ways to deliver the change. Avoid doing anything that might end up with defeat being snatched from the jaws of victory. In particular, be aware that as people learn new ways of doing things they will make mistakes, so maintain a blame-free environment, where the mistakes are used for embedding learning.

In times of change, learners inherit the Earth, while the learned find themselves beautifully equipped to deal with a world that no longer exists.

People who are already at this stage can be helpful in drawing on other people who are slower through the curve.

With luck, people get a chance to get all the way up here before the next change. Rejoice and celebrate!

It is here that the changes become fully integrated: people are fully committed to the new ways of working and are enjoying the benefits of the change.

Your role as a manager

Notice where people are on the curve and manage them appropriately. Also be aware that real life is never as simple as the model. People are often involved in several changes at once. They also have change curves within their personal lives.

One way change fatigue occurs is when people spend lots of time at 3, 4 and 5 with change after change. These are not comfortable places on the curve. People get tired of this. They never really settle on anything. One symptom is people going into denial and staying there in greater numbers.

Try visiting the other person’s reality by finding out and acknowledging where they are on the change curve before seeking to influence them.

Think about and reflect on your own experiences of coping with change, and the feelings and behaviours you have observed in yourself and others. Think of changes you have gone through and the way you went through the curve. Use this personal experience to empathise with others going through change.

The change curve is a simple and very useful model to explain to others. Used during change situations, it can help in handling confrontation and resistance, and with building trust and cooperation. While anyone can describe it, personal experience of living through the stages makes it more powerful and more readily explained to others.

Hand across the chasm — in support

The change curve resembles a chasm or abyss into which it is all too easy to fall. Crossing such a gorge is daunting, whether for the novice or the safety-conscious veteran. Negotiating the manifold changes which now characterise the environment of most organisations can seem like attempting to cross a snowfield criss-crossed by innumerable hidden crevasses.

Experienced leaders and managers of change have the responsibility to help and support others as they cross.

Your function is to provide a reliable bridge wherever possible. Your job also entails the skills, ability and willingness to go down into the crevasse to assist those who have fallen, or who have chosen to descend and are unable to climb out.

Hand across the chasm – support for others

As a leader of change, you will pay attention to the needs, motivation and capability of others.

You will seek to understand, and will listen, build rapport and provide coaching and support.