Procrastination – the deferment or avoidance of an action or task – affects everyone to some degree or another. For the person procrastinating, this can result in stress, a sense of guilt, the loss of productivity, the creation of crisis, and shame or guilt about not fulfilling their responsibilities or commitments to others.

Procrastination is only remotely related to time management (procrastinators often know exactly what they should be doing, even if they cannot do it), which is why the commonly-touted cure of very detailed schedules doesn’t usually help.

Nothing is so fatiguing as the eternal hanging on of an uncompleted task.

What are the benefits of overcoming procrastination?

Peace of mind, a feeling of strength and purpose, and the healthy sense of being in charge of your life. While procrastination makes you feel weak, useless and helpless, taking charge of your life will make you feel strong, competent and capable, giving you an increased sense of personal freedom.

Procrastination is not purely a motivational problem, though it is often seen as one. In fact there can be many causes, each of which will require a different approach. In addition to the suggestions below, any increase in motivation levels will always help, so use the other tools and techniques in this topic to raise the motivation levels, both for the activity itself and for the desired outcome from the activity.

If you want to make an easy job seem mighty hard, just keep putting off doing it.

Either the task seems hard to do (and we naturally tend to avoid difficult things in favour of those which seem easy to us), or so easy it is boring.

Ideally, you want the task to be in the Stretch or Mastery zones in the diagram below. 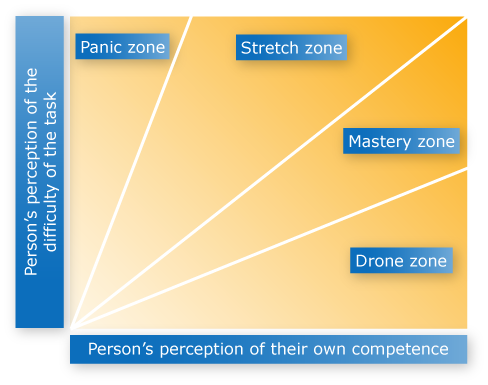 The key here is that it is the perception of the difficulty of the task that is important.

If the task ends up in the drone zone, there is less you can do, but these types of routine, boring task still need to be done. Try to find some way of increasing your perception of the difficulty of the task:

This is about our perception of the time it will take, and also our belief that the time has to be in one big block. How often have you got stuck into a task and discovered that it did not take as long as you thought it would? Our estimates of time are not always reliable.

It is an undoubted truth, that the less one has to do, the less time one finds to do it in.

The answer here is to break the task into aspects or chunks that can be done in smaller chunks of time. This will always be possible, no matter what you might first think. It may not be quite as efficient to do it that way, but this is still better than not doing it at all.

Lack of knowledge or skills

No one wants to make mistakes, so wait until you learn how before you start.

This is much the same as perceiving the task as difficult (see above).

I hate doing it

This is the kind of procrastination typified by the delay in filling out your tax return, which means you leave it until the last minute.

We often build the task up to be a big bogeyman in our minds. It takes on a character that is larger than reality and seems ever more horrible. This is reinforced every time we walk past that pile of papers waiting to be sorted out.

The best way out of this is to focus on the finished outcome and what that will bring. In the case of a filed tax return, it is often relief that it is over for yet another year. You need to see the task, no matter how unpleasant, as a means to an end that you really want.

The task must go exactly right or it should not be started. You will hear the words ‘should’, ‘ought’ and ‘must’ within the words used to talk about the task.

Make an effort to praise what you have done. See the good in it and notice how you have improved even during the task.

An interesting aspect of this cause of procrastination is that it often masks issues relating to self esteem and self confidence. See the topic on Confidence.

If we are unhappy with someone, we’ll often withhold our best efforts, perhaps as a way of getting even.

It can be hard to do good work for a boss you don’t like much, and in that situation it can be easy to delay delegated tasks, especially if you have other routine work to do that you can say took up all of your time.

It is better to aim to get promoted out of that position, rather than demoted.

This is based on our belief that we need to be in a certain state to do the task. This may be so, but waiting for that state to spontaneously appear will simply lead to procrastination.

Tomorrow is often the busiest day of the week.

If you look at the pages on State management in NLP and also the Emotional Intelligence topic, you will realise that your state is much more within your control than you thought. Work out what state you need to be in to do the task, and then seek to access that state, using the tools and techniques from the links above.

This occurs when we delay the task because we don’t believe we are good enough or deserve the success that a completed task will bring. This is about becoming less successful and less visible to satisfy an inner self concept. Often, that inner self concept is years out of date and you are actually far more accomplished now than you were.

See the topic on Confidence.

Procrastination is reinforcing – every time you delay, it reinforces your negative attitude toward that task. Every time you put off something you dislike, you

The cure here is to just do something related to the task – do anything, just to get active and involved, as that will change your perception towards the task.

In actual fact, all the tasks we procrastinate over are neutral: they are neither good nor bad, hard nor easy, until we make them so by applying our beliefs.

It is these beliefs, probably created using one of the mechanisms above, that determine what we anticipate as consequences, and thus the level of motivation we have for a task. We then look at other tasks we could be doing and, if they have a higher level of motivation, we will do them instead.

So, as well as the ideas in the page above, always seek to manage your motivation levels.

One way to influence your motivation is to look at your reasons for delay. Often, when they are brought into the light of day and written down, they seem a little stupid, and lose their power. So go ahead and write down all the reasons for delay. You will need to dig deep, as some will be well hidden. Then look at each critically, and test whether it really is true.

For each one ask ‘Is this true?’