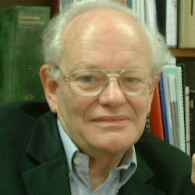 Simon Webley is the Research Director of the Institute of Business Ethics in London.

In the 1950s, he studied economics and political science at Trinity College, Dublin. In1958, he joined the economic research unit of Reed International, a major paper and publishing organisation. In 1962 he was appointed group information officer (economics) in the public affairs department of the same company.

In 1967 he was a faculty member of Medway College of Technology and help set up the Foundation for Business Responsibility. In 1969 he undertook the first survey of what company directors in the UK considered to be their and their colleague’s business practices. ‘British Businessman’s Behaviour’.

In 1995/6, Simon acted as rapporteur for the high level consultative group which produced the Inter-Faith Declaration on Business Ethics. He was a visiting Fellow of the City (now Cass) Business School from 1993-2003.

Simon took up his present post in 1998 having been a consultant to the Institute since its founding in 1986. He has written eight studies for the Institute, contributed to journals and books and regularly speaks at conferences in different parts of the world on applied business ethics.

In his current role at the IBE Simon helps a range of international business companies and organisations and has lectured and written on business practice topics in many countries.

The IBE helps organisations to strengthen their ethics culture and encourage high standards of business behaviour based on ethical values. It assists in the development, implementation and embedding of effective and relevant ethics and corporate responsibility policies and programmes. It helps organisations to provide guidance to staff and build relationships of trust with their principal stakeholders.

Simon has published a number of studies for IBE and others on business ethics, the most recent being Making Business Ethics Work (2006) and Corporate Use of Codes of Ethics (2005). In 1993, he compiled the Interfaith Declaration on International Business Ethics.

The Institute of Business Ethics