We use our five senses to interact with the world and gather information from it. In NLP shorthand, the senses are often reduced to initial letters: 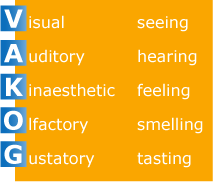 After this sensory information has been through our perceptual filters, (see How we filter...) we re-present the world to ourselves internally with these five systems – hence called representational systems. It is a bit like a movie going on in our head, complete with all the senses – not just sight and sound, but all the sensory elements.

Our internal representations are made up of the five listed above, plus another called Auditory Digital (Ad), which is our running commentary of the movie or our self-talk.

In effect, this means that if you suggest an idea to someone, they may run one of several programmes to think about it. They may

Actually, they will use a combination of the above programmes, though one may dominate.

There’s no single thinking programme used by the whole human race. Different people use their senses in different proportions and different ways to get results, and their language patterns hold clues to the programmes they are using.

By understanding representational systems and using this knowledge elegantly, you can

These programmes govern what we call thinking – or making sense of the world. And since thinking is such a crucial part of who we are, it’s worth knowing a bit more about how we do it.

It is also worth knowing how other people are thinking, as this will hugely improve your ability to communicate with them effectively.

These six representational systems are also called ‘modalities’ of thinking. They are what we use to think, so these modalities could be called the programming language of the brain.

Each of them can be looked at in more detail and in a way that means you can actually use them as a programming language and rewrite parts of the programmes that you have running in your mind.

For more about this, see Submodalities, but you will need to understand the representational systems or major modalities first.

We have general preferences, and for some tasks we would obviously need to use one system more than others – for example, photography would require more use of visual thinking.

However, most of us favour one system over the others when it comes to internal mental processing. We make more distinctions about our world in this preferred system. This comes out in our language in the form of clues to the type of thinking going on internally. If you know about these clues, you know something about how a person is thinking; not what, but how.

There are many idiomatic phrases which also act as clues to the form of internal processing being used at any given moment. Although this language may just appear to be idiomatic, it is often an accurate indication of that person’s model of reality and how their thinking processes work. For example:

Here are some examples of words and phrases that can act as markers for the style of internal processing being used. The NLP jargon word for these markers is ‘predicates’.

Bear in mind that we sometimes use words to cross over into other representational systems (for example, blue music or sweet dreams), and some words could indicate one system or another, depending on the person using them. For example, ‘glow’ could indicate that the person is seeing a picture (V) or feeling a warm sensation (K).

Do this for the three main thinking modalities – visual, auditory and kinaesthetic.

Notice how they react.

If someone tends to think predominately in one system – for example, visual – their perceptual filters will be set to open for the visual channel and less open on the others. This means that, when seeking to communicate with them, things will go more smoothly if you use visual language, show them pictures and diagrams, and point and gesture to build shapes with your hands. Information presented to them in the visual modality will most easily pass through their perceptual filters.

If they are visual, and you are auditory in preference, you will communicate more effectively if you adopt their system, rather then give them information in your own. If you give them information largely in auditory terms, they will filter, delete and distort the information much more as they seek to translate it into something meaningful for their map of the world.

By now you will be wondering about, or will have tried to guess, your own preferences regarding representational systems. It is important to understand that there is no black and white system with which you can label people in absolute terms. There are many shades of grey. We need to talk about tendencies and preferences, and cannot really say ‘he is visual’, since we use all of the systems all of the time.

Even though you have a preferred system, yours may be a strong or weak preference, and some people are more skilled than others at using their preferred or other systems. A skill shared by successful people is the ability to move between the systems with ease, using the one most appropriate to the task in hand.

There is little hard research into the proportions of the population which exhibit a specific preference, and quoted figures vary. However, it is generally reckoned that in Western cultures it is about 50 per cent visual, 20 per cent auditory (tonal or digital) and 30 per cent kinaesthetic, though these figures are often disputed.

Some observers also state that there is a gender bias, with more women than men having kinaesthetic preferences, and more men then women having visual preferences.

The founders of NLP were curious about expressions such as ‘I see what you are saying’ and decided to do an experiment.

They asked a group of students their purpose for being in the class. They gave out different coloured cards, depending on whether the student used mostly visual, auditory or kinaesthetic language when answering the question.