An amusing and memorable metaphor to help clarify two basic types of human behavioural programming is Cats versus Dogs. Oddly enough, the natural characteristics of these two household pets can be both a descriptive and an accurate way of illustrating human behaviour. By exploring the nature of each animal, the differences between the credible cat and the approachable dog can be clearly demonstrated.

Human behaviour is very complex, but this metaphor cleverly illustrates the common tendencies for people to think and act in two distinctly different ways. Once you can identify the patterns of yourself and others, you’ll find it easy to appreciate what makes people act in certain ways; you will therefore be able to predict their behaviour and inspire, motivate and manage each type more efficiently. You’ll also be able to accurately place people in positions where they will thrive and contribute their best.

The cat and the dog

If you think about the classic stereotypes of a typical household cat and dog, the differences are immediately obvious. The cat behaves as if he owns the house and everyone is there to serve him. The dog acts as the loyal servant of his master. The cat is very independent and aloof, and does exactly what he wants. The dog is overly friendly, dependent and gregarious, and does whatever he is told. You can’t teach a cat, punish him or reward him – he just ignores you and carries on doing what he wants. A dog can be taught lots of tricks and he overreacts to both punishment and rewards. Cats tend to be very still and serene. Dogs tend to be either in constant movement or sleeping at their master’s feet in total adoration. Fights between the two are usually won by cats. Dogs both fear and provoke cats. Cats ignore the existence of dogs.

Translating this into more human terms, it is important to remember that each person always has both cat and dog capabilities. There is no value judgement implied. It is not better to be either cat or dog. In fact, a truly charismatic leader has usually mastered such a blend of both that it is almost impossible to establish which one is their preference. So, the best objective to aim for is to be able to shift your behaviour from cat to dog, or vice versa, according to what the situation requires and the ultimate result you wish to obtain.

Only one man in a thousand is a leader of men – the other 999 follow women.

Here is a graph to depict the difference between the two extremes of cat and dog. This indicates an analogue scale, with various degrees of cat and dog qualities as you move up and down the diagonal line. Just as there are different types of cats and dogs, so there are different degrees of cat and dog behaviour in people. An overly-enthusiastic, friendly Labrador may be at the bottom-left extreme end of the scale, moving up to an Alsatian or a poodle towards the centre of the graph. Then the friendliest, soppy tabby might be at the bottom end of the cat line, moving up to a Siamese at the top right.

The dog end of the scale represents how approachable a person is in their behaviour. The cat end represents the degree of credible behaviours displayed. In the general population, there are many more dogs than cats. Dogs become followers and cats become leaders in an organisation. 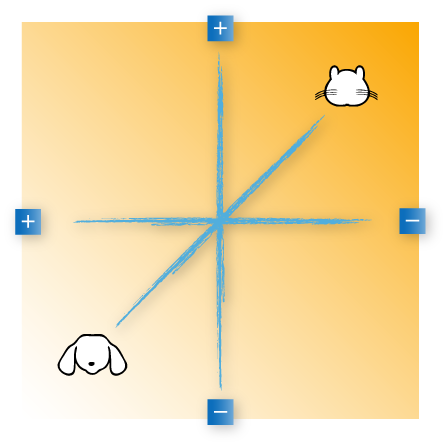 As you read the following descriptions, notice which one you feel most describes you and people you know.

Dogs are great ‘people’ people. They thrive on relationships and want everyone to get along and be happy and harmonious. So they focus attention on matching others, being agreeable and liked. They communicate in friendly ways to enhance camaraderie. They are good team players and want to know everyone’s opinions before coming to a decision.

Dogs prefer information gathering, which they are quite good at. They love learning and value expertise, so they usually have great proficiency in their profession, often acquiring several degrees. But despite their incredible competence, they lack confidence and never believe they know enough to wield power, make decisions or come up with new ideas.

They are wary and uncomfortable with power. They rarely seek promotion as they feel more comfortable with doing a good job at handling complex detail. Their reactive thinking style makes them great at problem solving. Their love of constancy and sameness means they take great care to move away from potential disasters, often by following well-established, tried and trusted procedures. They like to skip straight into the ‘doing’ part of the job, thriving on mastering the detail. Dogs do their best to make allowances for others’ mistakes, put up with situations or accommodate bad behaviour beyond the norm... until their anger exceeds the threshold and explodes.

If you want to get a dog to think more creatively, present them with a problem to solve. Dogs also enjoy receiving compliments and appreciation regularly from anyone and everyone. Satisfy their need to be liked and they will do anything out of loyalty and friendship. Friendly associates, training programmes and good work environments may be better motivators than reward schemes.

Cats are great dreamers and natural inventors. They love brainstorming, new ideas, lots of options, change, anything new and different, and lateral thinking – the wackier the better. They are highly proactive, always moving towards some objective. They prefer the big picture overview, and can be extremely goal oriented. They refer internally to themselves when making decisions and will never do anything unless they chose to do it for themselves. Their focus on self and objectives makes them so highly independent, that they often prefer to work alone.

Cats will explode for effect, if it will enhance their power play, without actually feeling upset.

Because cats are also highly competitive, they can be stimulated into action through competing with the excellence of other cats. They like power, seeking promotion with confidence, even when they lack the competence. They are comfortable with power and make good leaders when their values and objectives are right for the job. They don’t shy from conflict and often enjoy mismatching and provoking debates. They only respect other, higher cats. In fact, they hardly notice the existence of anyone else – unless, of course, that person might be useful to them in some way. In such cases, the cat will turn on the charm and woo the person into giving what the cat needs.

In a cat’s eye, all things belong to cats.

Cats are so preoccupied with their own thoughts that they can walk right past people and not see them. Receiving compliments feels meaningless (even insulting), unless the compliment comes from a much more important cat – one in a higher position than they are. Cats are generally quite dissociated from their emotions.

Just as with the animal, it is hard to teach, motivate or punish a human cat. They are simply not obedient. They will just continue to do what they want. However, when they have decided they want something, their persistence and determination almost guarantee success.

If you respect cats and admire their expertise, they may tolerate a ‘fellowship of equals’. If you can tweak their curiosity – perhaps get them interested in a new, innovative development project – they might choose to get involved. Appealing to their higher values will help to motivate them. Motivate them even further by ‘teasing’ them. Instead of supplying full information about a project, give them tantalising overviews and make them want to know more. Cats are more likely to be motivated by bonus reward schemes than dogs.

To clarify the cats and dogs metaphor, imagine being on a plane. The pilot of the plane (a cat) speaks to the passengers from the cockpit at the beginning of the flight, talking in a monotone, credible voice about the altitude, conditions and estimated time of arrival. He sounds authoritarian, crisp, businesslike, competent and in control. The passengers feel secure and at ease listening. Then the flight attendant (a dog) comes down the aisle offering beverages. He smiles, looking and sounding friendly, approachable, sensitive and sympathetic to your needs. He asks you what you’d like to drink or whether you need a blanket. He cares. You feel well looked after.

But imagine how different you would feel if the pilot spoke with the dog attitude of the flight attendant – smiling and laughing, sounding gushy, friendly and less credible. How secure would you feel with him in the cockpit? Next, imagine how little you would enjoy a flight attendant with a cat attitude – stern, emotionless, ignoring your presence and requests, crisp, dissociated, authoritarian and controlling. The attributes of cat and dog need to be appropriate to the situation.

A brief summary of CAT and DOG qualities

Both cats and dogs can be creative: cats have a more natural desire for new ideas, while dogs prefer problem solving.